David Sedaris returns to the Orpheum Theatre for a night of humor and readings, followed by a book signing. Watermark Books & Cafe will be on site selling copies of his latest release, Happy Go Lucky, along with some past favorites.

David Sedaris is one of America’s pre-eminent humor writers. He is a master of satire and one of today’s most observant writers. Beloved for his personal essays and short stories. David Sedaris is the author of “Barrel Fever”, “Holidays On Ice”,  “Naked”, “Me Talk Pretty One Day”, “Dress Your Family in Corduroy and Denim”, “When You Are Engulfed in Flames”, “Let’s Explore Diabetes with Owls” and “Calypso”, which was “Washington Posts”’ Best Book of the Year. He is author of “Squirrel Seeks Chipmunk: A Modest Bestiary”, a collection of fables with illustrations by Ian Falconer. He is also author of the essay length ebook “Themes and Variations”. Each of these books was an immediate bestseller. He was also editor of “Children Playing Before A Statue of Hercules: An Anthology of Outstanding Stories”. His pieces regularly appear in “The New Yorker” and have twice been included in “The Best American Essays”.

Sedaris and his sister Amy Sedaris have collaborated under the name “The Talent Family” and have written half-a-dozen plays which have been produced at La Mama, Lincoln Center and The Drama Department. He’s been nominated for five Grammy awards for Best Spoken Word and Best Comedy Album. There are over 16 million copies of his books in print and they have been translated into 32 languages. He has been awarded the Terry Southern Prize for Humor, Jonathan Swift International Literature Prize for Satire and Humor and Time 2011 Humorist of the Year.

Pick up your copy of David Sedaris’ most recent book, Happy Go Lucky, at Watermark Books & Cafe. Purchase in store or online HERE. 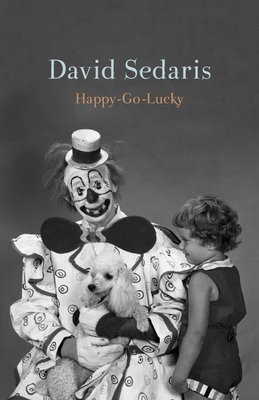